I have a couple of qualifications for what I consider “good food.”

In the ideal world, everything I consumed would satisfy both qualifications. Unfortunately (or fortunately), this world contains ice cream and molasses cookies. Both of which are exceptionally tasty, but lacking in the healthy and wholesome department. For such treats, I make my sacrifices. I’m a bit disappointed, however, when I make a new thing, and it satisfies neither of the above qualifications.

Stroganoff fell into that category for me.  It was good. Don’t get me wrong. It just wasn’t mmmmmmmm…..GOOD! There were no fireworks in my mouth. And since it contains almost a full stick of butter and a good bit of sour cream, all sitting in a bed of pasta, it’s not exactly what we would call health food.

All that said, I give it points for being a quick, weeknight dinner. From fridge/cupboard to table in less than 30 minutes.

If you’re interested in the recipe I used, check it out on Simply Recipes.

I wanna know: Ever made a recipe you weren’t crazy about? How do YOU feel about stroganoff?

There is a recipe on allrecipes.com that is my all-time favorite. It’s called Grandmother’s Buttermilk Cornbread. If there were a scorecard for recipe awesomeness strictly based on the recipe’s name, this one would be a winner. First, the word “Grandmother.” Any recipe that comes from any grandmother’s kitchen is sure to be tried and true and yummy. Can I get an “amen”? Second, the word “butter.” Enough said. And third, “bread.” Nothing says comfort food like bread, warm our of the oven. Especially when it’s coming out of grandma’s oven. And there’s butter involved.

I’ve made this recipe a few times. Usually with chili. This time, I thought I’d change it up. You see, on Saturday morning, I ended up at Meijer, and found their not-quite-dead-yet veggies rack. If you get there at the perfect time, you can buy almost-expired, fresh produce at steep discounts. 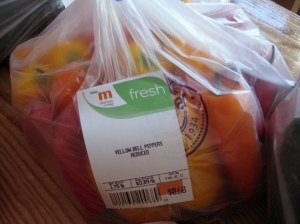 So, I invited a few friends over to join me+family, and we made fajitas with all the fixings. The plan was to make mild fajitas; family isn’t a huge fan of spicy food. Despite my best efforts to cook family friendly food, the peppers I got to supplement the bag of peppers you see above were the wrong kind. They looked like bell peppers and were labeled bell peppers, but were so spicy. Not bell peppers. Family wasn’t thrilled. The result: I got to take home all the leftovers.

Instead of just buying more tortilla shells for the leftovers (boring), I figured cornbread would be the ticket.

I was right. Magical. Cornbread, topped with spicy peppers and onions and fajita sauce, and then a dollop of sour cream. A big dollop.

Yum yum! A note about the cornbread: I substituted buttermilk for 1 cup whole milk+1 Tbs. lemon juice. Instead of lemon juice, you could use vinegar. Weird, but it works just fine!

Not feeling fajitas or chili for your cornbread? Make tacos or barbeque chicken! If you’re in more of a dessert mood, cornbread tastes great slathered in honey or jam, topped with fruit and whipped cream, or eaten plain.

I wanna know: What do you do with cornbread?

Looking for a unique cheese dip for Christmas this year? Well here you go! Darcy and I tried this wonderful recipe when we went to St. Julian for a wine festival this summer and got to see Laura Kruella do a cooking demonstration.

Process (or use your blender):

Process until smooth. The dip needs to be refrigerated for 3 or 4 days before it will be edible. Just a warning: if you taste test immediately after you make it, you will be sure that you messed something up. You didn’t. Just let the flavors sit together for a while, and they will be tasty! Serve with your favorite cracker. 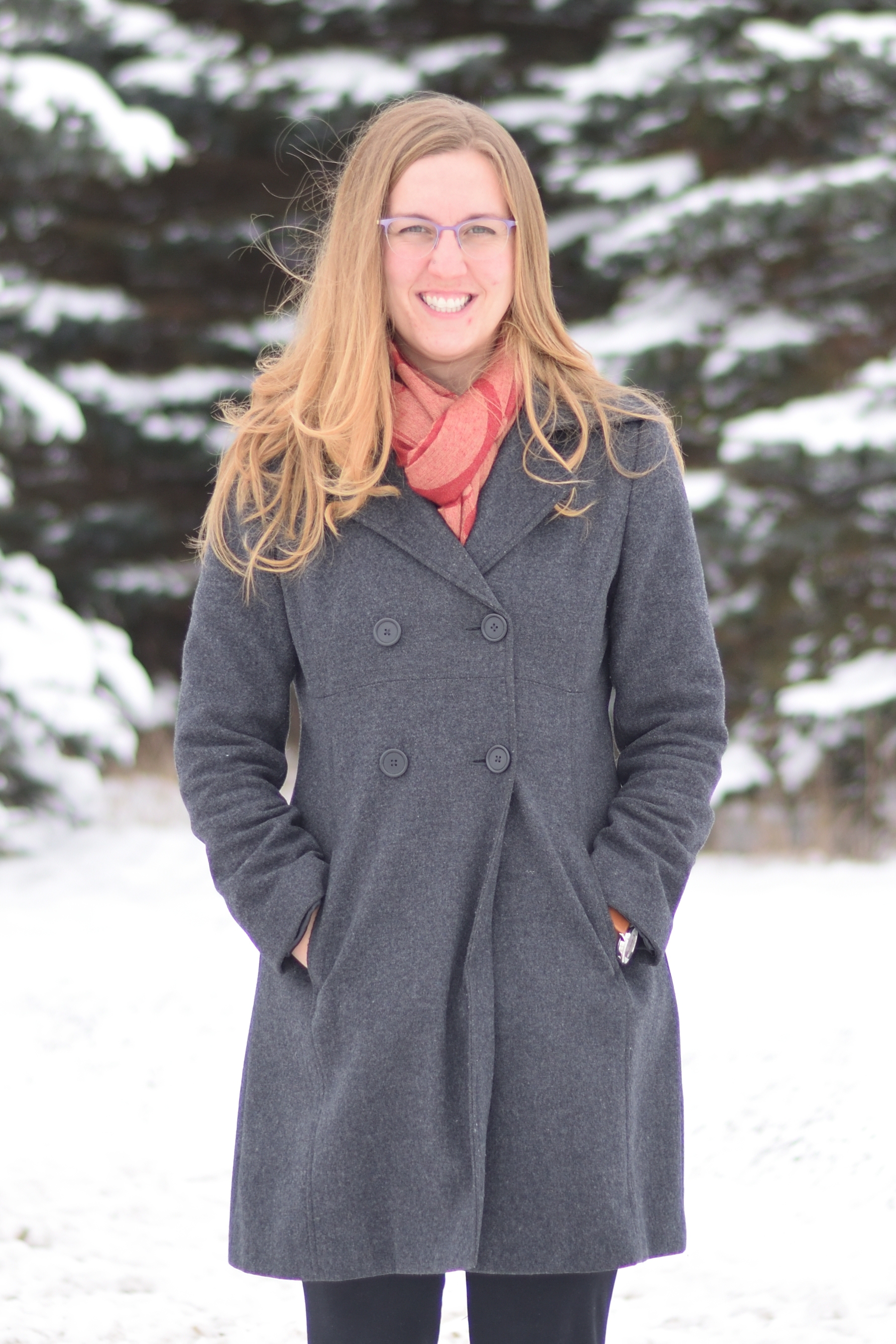 Sunshine+blue skies+snow drifts! My kind of wintery day ❄
Setting timelines for this year's (awesome, epic, amazing) garden! I've been inspired by @nikijabbour and her book, The Year Round Vegetable Gardener. Check it out if you're planning a garden this year!
20 years. ⁣ ⁣ Bob and I were chatting the other day, and figured out that we only have 20 years- give or take-with kids in our house. Not 20 years left, but 20 years total. We're almost 4 years in. Never before has 20 years felt like such a small amount of time. ⁣ ⁣ We have 20 years to help these little people grow into themselves. 20 years to model love, patience, kindness, forgiveness, and joy. 20 years to show them a God who loves them so much. 20 years to instill a lifelong love of exploration, adventure, and learning. ⁣ ⁣ As much as I love getting excited about the next phase and the new freedoms it'll bring us, I know 20 years is a drop in the bucket. It'll be behind us before we know it. ⁣ ⁣ Before it is, I'll be over here fighting to find joy when every surface is sticky, the Tupperware drawer is on the floor for the umpteenth time, and preschooler emotions flare. When I really think about it, there's nowhere else I'd rather be than right here, right now.
Two words regarding all of the sunny days we've had this winter: thanks, God!
I'm choosing to notice and appreciate more this season. Grumbling about the snow comes more naturally, but all of my complaining isn't going to bring spring any sooner. So I might as well settle in and look for the good. ⁣ ⁣ Today's list: an hour outside with just my big kid. Kitten mitten puppet shows, sunshine, and more sled runs than I can count. ⁣ ⁣ What are you appreciating today?
For the past few years, Bob has had a trade show the first full week of January. We have a couple of days after Christmas and New Year, Bob leaves, and it's The Mom Show for a week. ⁣ ⁣ We always survive, with much thanks to help from our families. And we're always, ALWAYS grateful to see him walk in the door at the end of the week. ⁣ ⁣ I tell you that to say our new year is slow to start. In many ways, it feels like today is our first day back into routine after the holidays. We're getting back to a regular schedule, normal meals, and not as much time in the car. I'm ready. ⁣ ⁣ January 1 is arbitrary, friends. You have 365 days (366 this year!) to start something, stop something, make a change, or declare a do over. You aren't behind. You didn't miss it. You haven't failed. ⁣ ⁣ Today is just as good a day as another to create the life you want to live. Here's to making it happen! #preachingtomyself
SLOW // our house moves at a pretty glacial pace. Most days, our living room looks like this. One kid is in her fort. Another is collecting things in a pot from the play kitchen. The last kid is fiddling with the dress up shoe she found. ⁣In other words, they're doing nothing and everything all at the same time. ⁣ We move slowly, spend a lot of time at home, have lots of space for play, and I wouldn't have it any other way for them. ⁣ ⁣ Do I get bored? Sometimes. But I know when they're older and we have practices and lessons and places to be and more things to fill our calendar, I'll miss these slow days at home. ⁣ ⁣ [Thanks for the prompt, ⁣ @hopewriters!]
OPEN // one of my goals for 2020 is to write more. I want to open a journal (or a post draft) and write words more often. ⁣ ⁣ @bobs_the_word gave me this lovely little journal for Christmas. Each date gets a page, there are a few lines for each year, and space for 5 years. ⁣ ⁣ So far it's nothing profound, and I don't expect it ever will become such. But in 5 years, to have a book full of our little moments? It'll be the best. ⁣ ⁣ Here's to opening the book, the blog post, the story slide, and appreciating the lovely, normal days all the more because I took the time to notice them. ⁣ ⁣ [Thanks for the prompt, @hopewriters!]
LIGHT // where I live in Michigan, we typically have 4-5 months of snow each year. We'll very likely have snow 3 months from now, and it's fine, I'm fine, we're all fine.⁣ ⁣ Honestly, it isn't the snow that makes winter difficult for me-it's all the overcast days. The gray, the dreariness, the lack of sunshine and blue sky. It gets to me! ⁣ ⁣ But this year? We've had such a strange winter and have had so many days full of light, long shadows, and sun streaming into the windows. It makes everything feel more tolerable! ⁣ ⁣ Today, I'm grateful for the sunshine, for these 3 kids, for our sled, and for the beautiful place we get to call home. I'm crossing my fingers we'll have a winter full of light like we had today!⁣ ⁣ [Thanks for the creativity prompt @hopewriters!]