An elderberry expedition! I was at Darcy’s house this morning when we were weighing our options for what to do with our empty day. We occupied ourselves with the A-Man and a thrift store for a few hours. When we got back, it was suggested that we go elderberry picking. Always up for an expedition, I was more than in!

Her mom makes some killer wine (I tried her rhubarb. awesome!) and wanted to start a batch of elderberry wine. She’d been making a list of places where elderberries are growing on the side of the road.

All in favor of a bit of adventure, Darcy, Caleb, and I hit one of the back roads on the list and found an elderberry bush. 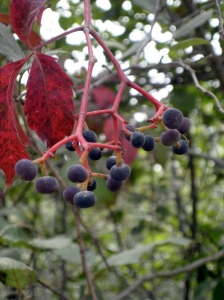 Aren’t they pretty? Well, it turns out we only thought it was an elderberry bush. Oops. When we arrived at the next destination on the list, we discovered only one available berry. Oops. An hour wasted picking the wrong fruit. Here’s the real deal:

Not to be discouraged, we picked the bushes clean. And then discovered that the “trail” we were on was someone’s driveway. Hope that they won’t miss their elderberries!

We picked this times a little more than 2. Not so bad!

Tonight, I discovered a new group that I love! Cadillac native Rachael Davis and the band Steppin’ In It collaborate to form the group Shout Sister Shout. They did a show in the Rotary Pavilion here in town. 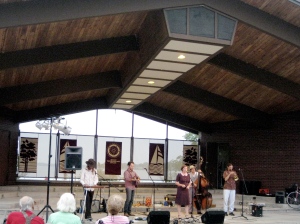 I loved it! It was a mix of bluegrass, funk, blues, jazz, etc. I heart fusion bands!

If you get a minute, check them out!

2 thoughts on “It’s an expedition!”

Sunshine+blue skies+snow drifts! My kind of wintery day ❄
Setting timelines for this year's (awesome, epic, amazing) garden! I've been inspired by @nikijabbour and her book, The Year Round Vegetable Gardener. Check it out if you're planning a garden this year!
20 years. ⁣ ⁣ Bob and I were chatting the other day, and figured out that we only have 20 years- give or take-with kids in our house. Not 20 years left, but 20 years total. We're almost 4 years in. Never before has 20 years felt like such a small amount of time. ⁣ ⁣ We have 20 years to help these little people grow into themselves. 20 years to model love, patience, kindness, forgiveness, and joy. 20 years to show them a God who loves them so much. 20 years to instill a lifelong love of exploration, adventure, and learning. ⁣ ⁣ As much as I love getting excited about the next phase and the new freedoms it'll bring us, I know 20 years is a drop in the bucket. It'll be behind us before we know it. ⁣ ⁣ Before it is, I'll be over here fighting to find joy when every surface is sticky, the Tupperware drawer is on the floor for the umpteenth time, and preschooler emotions flare. When I really think about it, there's nowhere else I'd rather be than right here, right now.
Two words regarding all of the sunny days we've had this winter: thanks, God!
I'm choosing to notice and appreciate more this season. Grumbling about the snow comes more naturally, but all of my complaining isn't going to bring spring any sooner. So I might as well settle in and look for the good. ⁣ ⁣ Today's list: an hour outside with just my big kid. Kitten mitten puppet shows, sunshine, and more sled runs than I can count. ⁣ ⁣ What are you appreciating today?
For the past few years, Bob has had a trade show the first full week of January. We have a couple of days after Christmas and New Year, Bob leaves, and it's The Mom Show for a week. ⁣ ⁣ We always survive, with much thanks to help from our families. And we're always, ALWAYS grateful to see him walk in the door at the end of the week. ⁣ ⁣ I tell you that to say our new year is slow to start. In many ways, it feels like today is our first day back into routine after the holidays. We're getting back to a regular schedule, normal meals, and not as much time in the car. I'm ready. ⁣ ⁣ January 1 is arbitrary, friends. You have 365 days (366 this year!) to start something, stop something, make a change, or declare a do over. You aren't behind. You didn't miss it. You haven't failed. ⁣ ⁣ Today is just as good a day as another to create the life you want to live. Here's to making it happen! #preachingtomyself
SLOW // our house moves at a pretty glacial pace. Most days, our living room looks like this. One kid is in her fort. Another is collecting things in a pot from the play kitchen. The last kid is fiddling with the dress up shoe she found. ⁣In other words, they're doing nothing and everything all at the same time. ⁣ We move slowly, spend a lot of time at home, have lots of space for play, and I wouldn't have it any other way for them. ⁣ ⁣ Do I get bored? Sometimes. But I know when they're older and we have practices and lessons and places to be and more things to fill our calendar, I'll miss these slow days at home. ⁣ ⁣ [Thanks for the prompt, ⁣ @hopewriters!]
OPEN // one of my goals for 2020 is to write more. I want to open a journal (or a post draft) and write words more often. ⁣ ⁣ @bobs_the_word gave me this lovely little journal for Christmas. Each date gets a page, there are a few lines for each year, and space for 5 years. ⁣ ⁣ So far it's nothing profound, and I don't expect it ever will become such. But in 5 years, to have a book full of our little moments? It'll be the best. ⁣ ⁣ Here's to opening the book, the blog post, the story slide, and appreciating the lovely, normal days all the more because I took the time to notice them. ⁣ ⁣ [Thanks for the prompt, @hopewriters!]
LIGHT // where I live in Michigan, we typically have 4-5 months of snow each year. We'll very likely have snow 3 months from now, and it's fine, I'm fine, we're all fine.⁣ ⁣ Honestly, it isn't the snow that makes winter difficult for me-it's all the overcast days. The gray, the dreariness, the lack of sunshine and blue sky. It gets to me! ⁣ ⁣ But this year? We've had such a strange winter and have had so many days full of light, long shadows, and sun streaming into the windows. It makes everything feel more tolerable! ⁣ ⁣ Today, I'm grateful for the sunshine, for these 3 kids, for our sled, and for the beautiful place we get to call home. I'm crossing my fingers we'll have a winter full of light like we had today!⁣ ⁣ [Thanks for the creativity prompt @hopewriters!]